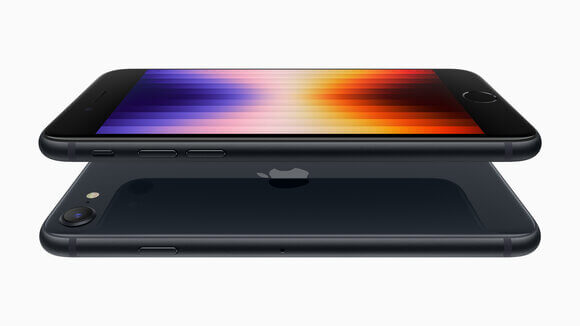 All You Need To Know About: The New iPhone SE

Want to upgrade from an iPhone 8 or older model, but don’t fancy compromising on its ease of use – or spend a fortune doing so? May we introduce you to the all-new iPhone SE, with its effortless blend of new technology, familiar design and value for money price.

A Frankenstein of a release, it features the body of an iPhone 8 with a stronger glass display to prevent breakage. Inside it houses a much faster processor from the iPhone 13 to boost overall performance and a longer battery life. It’s missed out on some of the advanced features like Face ID and MagSafe, but 5G capabilities are accounted for. Plus, it has a great camera, and is one of the more affordable Apple products on the market to date – which is always a huge plus.

Here’s what you need to know about the latest model to join the iPhone line up.

One of the down sides of the 2020 SE model was its battery life, which saw users having to plug in and recharge their phones far more frequently than they would have liked. But hurray! That issue has been resolved in the 2022 model, which features a much bigger battery, and improved power management thanks to the aforementioned A15 Bionic chip. According to Apple, the combination of the new chip and battery size has resulted in an extra two hours of juice – which means you get up to a day and a half of battery for moderate use, and a day for heavy use with some video time and gaming. MagSafe doesn’t exist on the SE, which would allow charging via a variety of accessories and attachments. But it does still feature standard Qi wireless charging which is good news for those who prefer to charge as they go rather than plug in.

The specs of the SE camera are generally identical to the iPhone 8: it has a 12-megapixel sensor and a wide angle lens with an f/1.8 aperture. What improved it is an A15 bionic chip (see Tech Spec for more on this) that adds features like Deep Fusion processing and Smart HDR4 processing to improve the look and feel of medium-to-light photographs. There’s no night mode and no cinematic mode as featured on the iPhone 13, or a ProRes video. But it does have a 60 frames per second video recording mode with a 4K resolution that allows you to capture videos in better quality. On the front of the phone is a 7-megapixel selfie camera for those all-important portraits. It’s an improvement on the camera quality of older models, but it has to be said, the dynamic range is lacking.

The design and display of the iPhone SE 2022 has received a mixed response from reviewers. Some liked the familiarity of the design, which nods to earlier models with thick bezels that border the 4.7 inch screen at the top and bottom, and a home screen button in the bottom middle of the display. Some think it is dated and makes the relatively small screen even smaller than it needs to be.

The display is 750 X 1334 pixels LCD, and is bright and easy to see when using the model outdoors. The text looks small in the default setting, but it can be enlarged. The refresh rate has not been improved, which makes scrolling a little less smooth than it could be – and don’t forget you’ll be scrolling more if you’ve upped the text size. What has definitely improved is the body material, which has been built with high quality IP67 water resistance and super tough glass to prevent cracking and breakage. Plus, there are three colours to choose from – (PRODUCT)RED, starlight, and midnight.

The A15 Bionic processor really is the star of the show when it comes to performance, and it’s what makes the 2022 model of the SE so much better than previous incarnations, as well as other mid-range phones on the market. It’s faster, more versatile and also offers machine learning to speed processes up several notches above the 2020 handset.

Apple has added 5G compatibility to the SE, though be warned that it doesn’t support every aspect of the faster network and there is no mmWave support. So do check where you get your wireless service from to make sure it works. This isn’t an issue with the iPhone 13 Mini, however, which supports the whole range of 5G.

You can pre-order the latest SE (£419, Apple.com) until Friday 18 March, when it officially launches. This is for the entry level model with 64GB of storage. There are also models with 128GB and 256GB available.