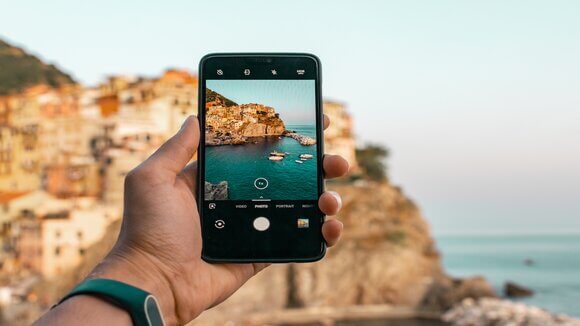 How To Keep Your Gadgets Safe On Holiday

With travel getting back to normal from the UK side of things, and many other countries also relaxing their entry rules and regs, we’re looking forward to taking advantage of this in the coming months by heading abroad with a new sense of freedom.

Of course, we’ll be taking a kit of essentials with us. Our phones, tech and cameras are now as important in our luggage as sun cream and swimwear, but sadly a lot harder to replace if they go missing.

To help keep your valuables safe wherever you go here’s the Switched On team’s top tips.

One of the easiest ways to prevent your items from going missing is to keep them in less obvious bags – that way, they’re not a clear target for thieves. If you can, slip laptops into waterproof soft cases and pop them into a larger shoulder bag or tote, rather than a laptop bag. The same with cameras. With mobile phones and smaller gadgets, keep them in an easy to access cross body bag – you can buy some which are splashproof for added protection. Wear this on the front of your body rather than the back, so you can have eyes on it wherever you go. You can also buy money belts that you wear on the inside of your trousers, many of which can fit a phone and smaller gadgets inside too.

Hopefully, you already use a screen lock on your phone, laptop and/or tablet anyway, but if you don’t – now is the time to do so. We recommend setting a number that is easy to remember, but that doesn’t follow a regular pattern – so yes, 1234 and 7777 are out of the question. Many gadgets now use fingerprint biometrics to allow access, which is even safer. So if this is available to you, enable this instead – no one will be able to guess your fingerprint.

Turn on ‘find me’ functions

Many phones have a locator function you can turn on via a separate device so you can track where it is – you just need to make sure that feature is operational on the phone as part of its set-up. It’s certainly not perfect – most thieves who can break into a lock-protected phone are smart enough to turn it onto airplane mode, meaning the ‘find me’ function won’t work. It also relies on the device being on and still having battery. Still, it’s worth enabling as if you realise sooner rather than later that your phone’s missing you could save yourself a fair bit of hassle locating it.

Remember, scammers exist in countries the world over. While it might be tempting to use free-looking public wi-fi hotspots abroad to keep roaming charges down, be aware that you will leave yourself vulnerable to man-in-the-middle (MITM) attacks. So be sure you’re using a familiar network connection. If you’re in a hotel or a restaurant, always ask for the network name, as clever scammers may set up a connection with a similar name. Also, using a form of encryption, such as a Virtual Private Network (VPN), helps to keep your data away from interfering parties.

Try not to use your phone in public

One of the most common circumstances in which phones get stolen is when they’re used and on show. So if you’re using a phone for directions when you’re in a new city, either try to memorise it in advance or use headphones for audio direction while the phone is in your pocket or bag. And when eating lunch al fresco, pack it away once you’ve taken the obligatory picture – thieves specifically target belongings left on tables in busy tourist areas.

Keep your valuables with you or locked away

It goes without saying that when staying in hotels always place gadgets in your room’s safe. And when it’s time to check-out, or you’re between hotels, make sure to keep your portable gadgets on you. Pack them separately in your hand luggage, rather than leave them in the luggage hold of a bus or plane, while you travel. And if you’re travelling by car keep them in a locked boot so they’re out of sight of preying eyes.

Damage limitation time. Think worst case scenario: you lose your devices, they get damaged or stolen. Material things could ultimately be replaced, but there are some things that simply can’t. We’re talking photographs, notes, documents and other important files. To prevent this loss, make sure you regularly back up your devices via an online cloud like iCloud for Apple or OneDrive for Microsoft. Or use an external hard drive. That way, you have all your meaningful items in one place whatever happens.

If you’re heading abroad this year Switched On’s Gadget Insurance automatically covers your tech worldwide. While our Travel Insurance policies are packed with features to provide full peace of mind while you’re away from home. Find out more here.