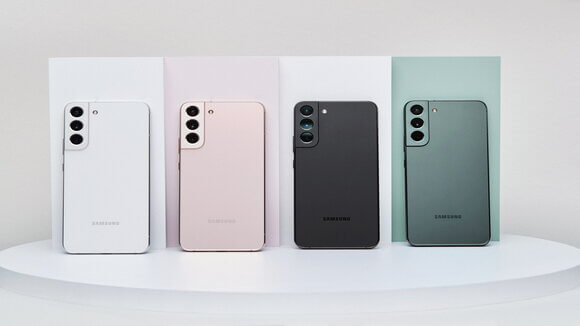 All You Need To Know About The Samsung S22

Phone owners firmly in Team Samsung will be feeling smug after their launch event for the S22 – the new range looks to make solid steps in the world of the smartphone, with clever additions and the latest tech that prove a worthy rival to the iPhone 13s.

Both the S22 and S22+ include nifty features like market-leading camera functions, thanks to the range of lenses plus the latest AI to create Insta-worthy images. The headline-grabber is the S22 Ultra, the top-end phone that rethinks how we use mainstream smartphones by including an S Pen stylus. In effect, it brings together the features and style of the Note series (their popular phone-tablet hybrid) with the high-end camera of their premium phones.

There’s great news on the environmental front too, as it’s part-made from recycled plastic and fishing nets. Slightly more than a marketing move, they’ve vowed to clean up 50 tonnes of plastic from the oceans.

The February 2022 event also unveiled the Galaxy Tab S8 tablet, but the focus was mostly on the phones. Here’s a look at their main draws in more detail.

The three phones hold on to the standard set by the S21 range, with some key changes. Similar to last year, the selfie camera is a 10MP lens and the ultrawide is still 12MP. But they’ve swapped out the 12MP wide lens for a much improved 50MP wide lens (or 108MP in the Ultra), at the expense of the 64MP telephoto lens that’s reduced to 10MP – although this has a better optical zoom of 3x (the S21 had only a 1.1x). In effect, it’s a net improvement in the camera hardware.

What really makes the difference this year is the sophistication of the software that leads to a better quality finish. For example, you can now auto-track up to ten faces on videos to make them look cinematic and make sure everyone is captured, and the Ultra has improved light sensitivity, for better night time pics.

Surprisingly, the battery performance is the main area of compromise – probably to keep costs down given the price hike in phone chips these days, and because even these lower-spec batteries are still ahead of their competition. While the S21 was 4000mAh (which gave around ten hours continuous use), the S22 has gone down to 3700mAh – but that’s still more than the iPhone 13 at 3227mAh. Similarly, the S22+ has reduced in battery size, but its 4500mAh is still much more than the iPhone 13 Pro’s 3095mAh. The Ultra retains its 5000mAh that gives around 11.5 hours of constant use – again, much more than the comparable iPhone at 4352mAh.

Resembling the Note 20 Ultra in look, the S22 Ultra is the largest phone, with a 6.8in QHD+ screen that curves at the edges, plus a slot to store and charge its S Pen stylus. It has a 3088 x 1440 resolution, easily trumping the iPhone 13 Pro Max.

All three phones have a solid 120Hz refresh rate, and use a new Corning Gorilla Glass Victus+ technology to make them the most durable Samsungs yet.

The S22 and S22+ come in white, black, green and pink gold, while the Ultra has similar options but swaps out the pink gold in favour of a burgundy hue. Those who buy from the Samsung website have the option of a few more striking colours.

The biggest change is arguably with the stylus – it’s now integrated in the Ultra, and it works 30% more smoothly compared to the Galaxy Tab S7 series. It also has better handwriting recognition – handy for note-taking.

All three have Bluetooth 5.2 connectivity, allowing for more stable multi-point connections with supported devices. As far as biometrics goes, they all feature facial recognition, but you’ll find improvements in their fingerprint sensors too.

The S22s all use the Exynos 2200 chip, a new, Samsung-made chip. Its performance has yet to be tested in the real world, so the jury’s out on that for now.

If you’re looking to insure your phone, Switched On’s award winning mobile phone insurance is packed with features including immediate cover, 24/7 online claims and fast repairs and replacements. Take a look here for more info and to get a quote.