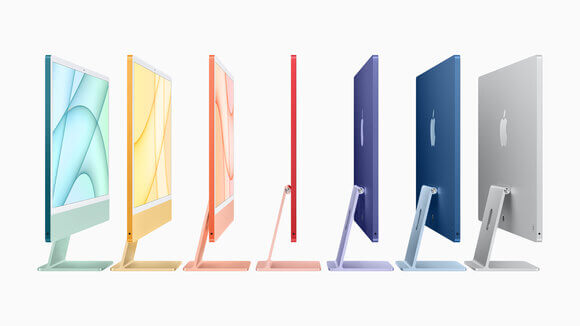 Spring is the time for renewal, and it’s in that spirit that Apple revealed a number of new and improved products for iTech-lovers.

The headline news was the launch of AirTags. But always on the front foot, the tech giant has updated some of its biggest sellers too.

Such launches bring the age-old debate of whether the updates are simply Apple trying to get their customers to upgrade, or whether the new products are technologically advanced enough to justify the price tag. Either way, the spring 2021 updates are certainly nifty pieces of kit to own.

Here we take a closer look at what the new range looks like.

The big news is that there’s another way that Apple are helping to make life easier: they’ve finally launched the much-mooted AirTags. Similar to the market leader Tile, it’s a small bit of plastic that you attach to an object that you don’t want to lose, like a bike, luggage or keys. They use Bluetooth or an Apple signal so that if it goes AWOL, you can use the ‘Find My…’ locator for basic controls, like seeing where it is on a map, or making it emit a sound. They cost £29 or £99 for four. Just like a Tile, it runs off a battery that you’ll need to replace every year. Accessory fiends will love the range of loops they also sell to help them clip onto devices, including a top-of-the-range one designed by Hermès. These are available from Friday 30 April, and could be a game-changer for the forgetful amongst us!

iMac users might well be tempted to upgrade their hardware with a version that’s vastly improved in both design and function. At its most superficial, a new range of colours are available that break with its stylish pastel palette, and return to the days of yore with a stronger, bolder blue, green, red, silver, yellow, orange, and purple.

Then, there’s the introduction of the M1 chip to the iMac. It’s already been added to the new MacBooks, and this neat bit of tech promises to make products up to 85% faster – perfect for our modern demands of heavy-duty games, streaming and video uploading. And it’s quieter too. The new iMac also has a six-speaker sound system, an improved camera, and a 24 inch 4.5K resolution retina display. Alongside this, Apple introduced a wider range of wireless keyboard options, including one with a built-in Touch ID sensor. This updated iMac will start at £1,249, and can be pre-ordered on Friday 30 April, arriving to customers from the second half of May.

The iMac isn’t the only device that’s been granted M1’s magic – we’ll also see it in the iPad Pro. The hi-tech chip, Apple says, will lead to a 50% increase in processor performance compared to last year’s iPad Pro. And there’s a 40% increase in GPU performance too, leading to better displays of graphical elements like video games and video streaming. It’s also got 5G built in, so that some models will have fast internet connection without needing wi-fi. Another upgrade is that it has a new and improved screen (the tech of which has been given the fancy title of Liquid Retina XDR), which makes best use of the quick connectivity and processing. Prices for the 11-inch iPad Pro 2021 start at £749, and the 12.9-inch model, £999, and it’s available to pre-order from Friday 30 April, with orders shipping in the second half of May.

While we’ll have to wait until autumn for the next big iPhone release, there’s a small update for those about to buy an iPhone 12: there’s now a purple option for you to consider. The new colour for the iPhone 12 and 12 Mini will cost the same as the others, starting at £699. You can pre-order it now, with deliveries shipping from Friday 30 April.

Last but not least, Apple’s TV offering reaches its sixth generation with the 2021 Apple TV 4K. It now has a processing unit that Apple claims to be as powerful as the Xbox One. It also introduces a colour balance feature, so iPhone users can hold their phones to the screen to properly calibrate the screen’s colours. Given Apple’s core customers are visual creatives, it shows they know their audience. It also comes with Thread smart home technology built in, so you can use it to control the tech in your home, and the Siri remote has been updated too. Price-wise it costs £169 for the 32GB and £189 for the 64GB. Just like the iMac and iPad Pro, you can pre-order it from Friday 30 April, with orders shipping in the second half of May.

If you’re looking for gadget insurance to cover any of your Apple tech Switched On provides great cover at low prices – get a quote from Switched On Insurance today.