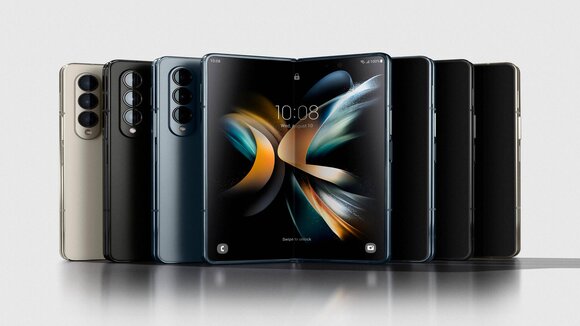 Remember when mobile phones first came out we were all flipping our phones and being generally cool? Well flip phones are well and truly back, but alongside them are the all new fold phones. Samsung recently unveiled the Galaxy Z Flip 4 and the Z Fold 4 at their annual Unpacked event. Both have recently gone on sale – so the question is, should you flip or fold?

One of the major differences between these two phones is the size. Even closed the fold phone is bigger, but when opened it’s more like a small tablet. The flip phone, in comparison, is portable and handheld. But there are other differences that go hand in hand with their size, like their battery life and camera functions. For the lowdown, here’s everything you need to know about the Samsung Galaxy Z Fold 4 and Flip 4.

For anyone who likes a phone with lots of screen, the Z Fold has a whopping 7.6” AMOLED display when open. Even when this phone is closed, it has a 6.2” cover display, that, while it doesn’t give you all its features at your fingertips, does give you enough for basic phone use. The resolution on the display is 2176 x 1812 pixels, so it’s sharp. It opens like a book and behaves like a tablet, although that does mean it’s a fairly hefty 263g. While it is heavier than the Flip 4, the Fold 4 is the lightest fold phone on the market so far.

If you’re looking for portability, the Fold 4 is much smaller and lighter, at 187g, and can fit snugly in your pocket. Although flip phones are nostalgic by design, this is a million miles away from the Motorolas of yore. This is a clamshell phone – but a sleek clamshell very much for 2022. It has a 6.7” AMOLED display and when closed there’s a 1.9” external display that allows you to interact with the phone’s basic functions.

As you might expect, things are a bit simpler on the Flip 4. It has a good 10MP selfie camera on the front and on the rear it has two 12MP lenses – one is a wide-angle lens and the other is an ultra-wide angle lens. This is an impressive update from the Z Flip 3, and as if to show that off, Samsung have noted that the wide sensor is now sixty five per cent brighter.

Both phones have 25W superfast charging and Samsung claims that both phones can go from empty to fifty per cent charge in just 30 minutes. They also both support wireless charging and reverse wireless charging. But their battery sizes are slightly different – the Fold 4 has an impressive 4400 mAh battery, which is split between two cells (one on the front, and one on the rear). The Flip 4 has a slightly smaller 3700 mAh battery, as you’d expect from the smaller phone, but it still lasts over eight hours in real-life tests, compared to over 5 hours with the Flip 3’s battery. Neither of these phones come with a charger in the box, so that part is up to you.

Whichever phone you go for, it will be one of the first phones to use the Qualcomm Snapdragon 8+ Gen 1 processor, the newest Android chip on the market, which offers ten per cent faster performance and about 15 per cent less power usage. The main difference between the two phones is in the storage. The Fold 4 comes with 12GB RAM and up to 1TB of storage, and can run three apps simultaneously across the screen. The taskbar is similar to a Chromebook, making switching between apps seamless.

In comparison, the Flip 4 has 8MB RAM and up to 512GB of storage – but no one is expecting it to match up to the Fold 4 in storage or features. For a smaller flip phone, the Flip 4 is still fast and performs well.

There’s a massive difference in price, but these are massively different phones. The Fold 4 will set you back £1,649, so it’s not cheap. But this is effectively a phone-tablet hybrid with some pretty nifty features, so you’re paying for more than just a standard phone. The Flip 4 comes in at £999. For a market-leading flip phone that’s portable but bang up to date, that’s a reasonable price. Both phones are available to buy now.

If you’re looking to protect your Samsung Galaxy Z Fold 4 or Flip 4 take a look at Switched On’s award winning mobile phone insurance. Our policies are packed with features including 24/7 online claims, immediate cover and fast repairs and replacements. You can even choose to get your device repaired (on claim approval) at a Samsung store. Find out more here.