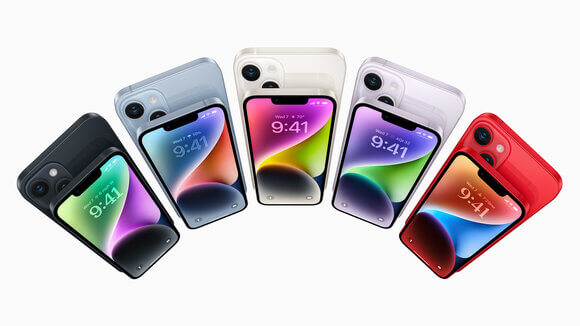 When Apple launched the new iPhone 14 range at its recent Far Out event, we could find out if the whispers about these new phones were simple speculation or true. And they were true. For this launch, Apple have ditched their smaller models to focus on the big hitters.

As we’re used to, the iPhone 14 is for those who like to update their phones with the brand spanking new model, and the iPhone 14 Pro is seen as the ultimate phone on the market. But the real difference with this launch is just how much further the Pro model goes.

The launch also revealed the 14 Plus and the 14 Pro Max, which are similar to the 14 and 14 Pro respectively apart from their 6.7” size (compared to 6.1” for the standards) and better battery life.

When it comes to the look of the new phones, there’s been plenty of talk about the notch on the 14 Pro, which differentiates it from both the 13 Pro and the 14. This all-new, long pill shaped notch is now called the ‘Dynamic Island’ and it’s where you’ll see notifications, incoming calls and other background activity.

The 14 Pro also now features ‘always on’ display. This feature means your phone can display time, date, calendar reminders, weather, and message notifications, without you needing to turn the phone on. Although Android users have been enjoying this for some time now, the iPhone 14 still lags behind and doesn’t include it. For the standard iPhone 14, it’s the new lock screen that’s the most noticeable change. The new fonts, sizes and image segmentation make the new lock screen visually impressive.

The camera is still the biggest difference between the 14 and 14 Pro, it’s just not the only big difference this time around. Both have some new features like the new Photonic Engine, which improves low light images. There’s also the addition of Action mode for capturing video footage, which smooths out shakes, motion and vibration.

Apple like to keep the battery life of their new phones under wraps, and that’s the case with the new iPhone 14 and iPhone 14 Pro. Apple haven’t included any information on battery life in their unveiling of these new models, except to say it’s the best ever of any iPhone. That’s a bit vague, but rumours are that it will offer an added hour of battery life from previous models.

Storage remains the same as it did on iPhone 13, but as the Pro can reach up to 1TB if you choose it, this is already a fair amount of storage. If it seems like the upgrades are minimal, especially for the standard iPhone 14, they are. But that’s the case across other brands: Samsung’s new S series have only had a few upgrades too, as focus moves to durability rather than the next new feature.

If you’re looking for great value iPhone insurance Switched On’s award winning policies are packed with features for total peace of mind including 24/7 online claims, immediate cover and fast repairs and replacements. Plus get two months free when you pay annually. Get a quote here today!