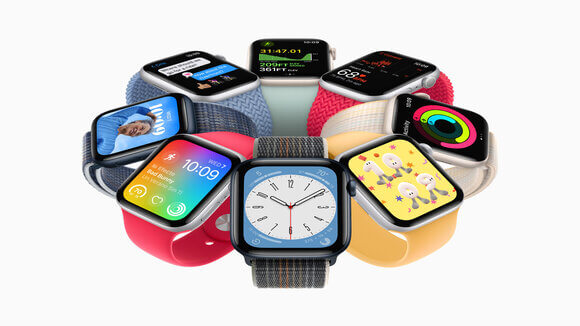 What’s New From Apple This Autumn

It was significant moment when Apple unveiled its new products at their Far Out launch earlier this month at Apple Park, the company’s headquarters in California. Not least because it was the first time since the pandemic that Apple hosted a real-life event. But what about the products? Do these new Apple gadgets live up to all their usual hype?

With the usual rumour mill working flat out up to this launch, there was a lot of expectation. And it seems Apple have indeed delivered with upgrades on their Airpods Pro, Apple watches and the newest iPhones. We’ve already given you the lowdown on the Apple 14 phones – now here’s everything you need to know about what else is new from Apple.

There are some distinct improvements and upgrades for the second generation of Airpods Pro. There’s an upgrade to the Apple H2 chip, from the previous model’s H1 chip. This brings better sound quality and clarity – arguably the number one feature you want from ear buds! Airpods Pro’s transparency mode adapts to the noise around you and adjusts its intensity appropriately, and Apple say the noise cancellation on these new Airpods Pro is twice as effect as its previous model. Apple also promise longer battery life – up to six hours – with bigger capacity from the charging case. The case also has an added speaker. All this brings a solid improvement from the previous model, and at £249, it’s a welcome one.

A direct upgrade on the Apple Watch Series 7, the Series 8 has some nifty new features and upgrades that place it in the wellness arena. The new feature that’s out in front of all others is the temperature sensor that’s especially aimed at women’s health. The feature can help track ovulation and symptoms of menopause. But the watch also has an upgrade on its safety features – including a cutting-edge crash detection which allows the device to alert emergency services if their complex AI deducts that you’ve been in a car crash. The battery life on the Series 8 has been extended to 36 hours, when using a low-power mode. With a standard aluminium case and sport loop, the watch arrives at £419.

For those people at the beginning of their smart watch journey, the Apple Watch SE is a very reasonable £259. This is the more basic version of the Apple Watch so no one’s expecting much fanfare, but for the price you do get a decent amount of features. This updated model is faster than its predecessor and it has a bigger screen, making it even easier to use. It has heart rate notifications and fall detection. Strangely, Apple have said they are marketing this lower-priced watch at children, though the features seem to suggest an older customer. It could, perhaps, be one of those products that attracts either end of the age spectrum.

The new Apple Watch Ultra is squarely aimed at outdoor athletes and adventurers. It’s a more rugged Apple Watch, and has a bigger screen with a titanium case, making it tough but lightweight. Impressively, the watch has up to 60 hours of battery life, so it’s ideal for long trips and exploring. Perfect for those on the move, there’s been an update to the GPS, including location tracking and a built-in siren, giving users a safer experience. This is a watch for a myriad of activities. The face includes a compass, and the watch can tell the wearer how deep they are diving, making it a diver’s watch too. Coming in at £849 it’s pricey – but it’s now a direct rival to Garmin, whose smart watches have been leaders in this market to date.