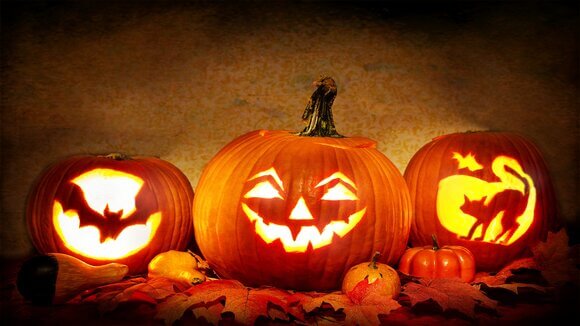 How Hallowe’en Is Celebrated Around The World

Because of the wild and wacky rituals we associate Hallowe’en with now, it might be hard to believe it began as a Christian festival that was meant to honour the saints. People in Europe would go door to door, dressed as saints, singing and asking for soul cakes. How times have changed. The saints became ghouls and ghosts and the cake became sweets. Then Irish immigrants took the festival to America where the trick or treating style of Hallowe’en we know today was born.

But there are places around the world who have their own way of doing Hallowe’en. Some have roots in their own festivals, like those that honour dead relatives or are an evolved kind of harvest festival. Some just do Hallowe’en in a bigger, louder, more colourful way than anywhere else. And a trip to any of these will be an experience to remember.

Here’s our look at how Hallowe’en is celebrated around the world.

Famous for its 17th century witch trials, it’s no surprise that the seaside town of Salem embraces Hallowe’en. They embrace it so much, in fact, they don’t only celebrate it on the 31st October, but all month long. Events start with a long costume parade at the beginning of October and finish with a huge firework display at the end of the month. This massive celebration of all things spooky is called ‘the haunted happenings’. It’s mostly focused on witches, of course, but there are also psychics in town to give visitors a reading, seances to summon the dead, haunted house tours, walking tours, and a grand witch’s ball. It sounds like an experience for adults only, but this is a family friendly event – expect the streets to be filled with outdoor markets, fairgrounds, and kid-friendly witchy workshops.

Officially the largest Hallowe’en festival in Europe, Derry Hallowe’en is a mix of modern Hallowe’en celebrations and the old Samhain festival: the Gaelic harvest festival that celebrated the end of the harvest and welcomed in the darkness of winter. It starts on the 28th October and ends on the 31st October, and people come from all over the world to get involved and witness this spectacle. The city’s 17th century walls are the backdrop for colourful projections, and parades take place day and night as the city’s people dress up in some incredible costumes. There’s art installations, guided walks, firework displays, jack ’o lantern contests and, as you’d expect, a lot of music, dancing and partying.

You wouldn’t expect anything less from the birthplace of Count Dracula, but Sighisoara in Romania knows how to celebrate Hallowe’en ­– it’s probably the creepiest Hallowe’en celebrations there are. Here, they go the extra mile with their costumes – you might see locals dressed as corpses being wheeled through the streets on trolleys. The big celebrations take place at the citadel, and include the terrifying ‘ritual killing of the living dead’. This ritual is not for the faint hearted. Based on Romanian folklore and traditional customs, it gives you a glimpse into what once went on here, although no living dead are actually killed. There are magic shows, performances of Romanian ballet and folk songs, and a howling to the moon contest. There’s also plenty of feasting, with dinners organised in dungeons and basements throughout the town.

Korea doesn’t traditionally celebrate Hallowe’en – instead they’re known to celebrate the festival Chuseok at the end of September. Chuseok is an autumn harvest festival that lasts for three days and is a public holiday. South Koreans go home to their families, eat great feasts and pay their respects to their ancestors. In Seoul, however, Hallowe’en is now becoming popular too, and Chuseok almost melds into this imported festival. Around this time, you’ll find ghost walks springing up all over town and people walking around dressed in spooky costumes. In all, it’s a unique intermingling of a traditional Korean festival and a modern Celtic festival.

Although Italy doesn’t traditionally celebrate Hallowe’en and you won’t see much trick or treating going on, Italians do celebrate Day of the Dead, or All Souls Day. This is the day Italians honour their deceased relatives, and it can be quite a mournful affair. In Sardinia, it’s taken seriously. It’s not officially a public holiday, but everyone treats it as if it is. Shops and banks are open as normal, but most people take time out to remember their loved ones who have passed over. There’s a traffic queue to get to the cemeteries, where Sardinians go to lay flowers and say prayers. The closest the children here get to trick or treating is going from house to house asking for cake in return for a prayer for the deceased.

Wherever you’re planning on heading to over the coming months Switched On Travel Insurance offers complete peace of mind that you’re protected for the unexpected. Find out more here.