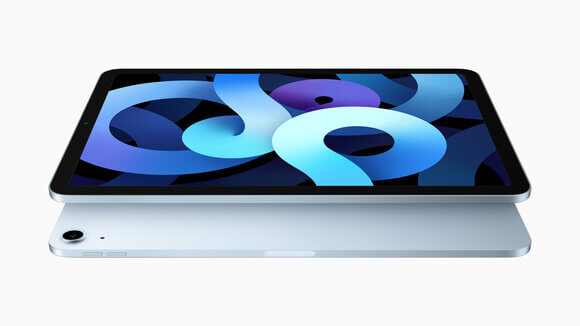 All You Need To Know About The New iPad Air

Announced in September at Apple’s annual launch event, the Apple iPad Air 2020 is a shiny, metallic jewel in their crown, bringing together the best features of the iPad Pro at a more reasonable price. And rejoice: it’s now on sale, so early-adopting tech heads can finally get their hands on one. And the word doing the rounds is that you’ll certainly want to.

Because of its competitive features and price, it looks to become the standard tablet for Apple fans. So those in need of upgrading their old tablet ­– or those who’ve been waiting for an excuse to buy an iPad – will want to take a closer look at what it has to offer. Here’s the lowdown on why the new iPad Air is the talk of the tech town.

When it comes to tablets, speed can quickly become an issue on older models, but the new iPad Air promises to be one of the fastest and most powerful tablets going, easily staying on par with the premium iPad Pro. The reason is partly because of its iPad operating system, but mostly because of its A14 Bionic processor, the same one used in the iPhone 12 that’s made it so appealing in the phone market. The next iPad Pro is likely to feature this processor, so if you’re looking for a top-end tablet, hold out for that. But in the mid-range, the performance can’t be beat.

Apple owners will know that the iPad is a breeze to use, so expect all the good UX thinking that comes with it. And this iPad also features a bigger screen than last year’s version, and Touch ID on its power button (although you’d miss the ease of Face ID). It doesn’t have some Pro features like an ultrawide camera, ProMotion Display or the LiDAR scanner, but it doesn’t have the hefty price tag either…

Those after the iPad’s usually strong battery life won’t be disappointed. Despite the powerful performance, one full charge lasts as long as you’d expect it too: two or three days of normal use streaming videos, for example. Of course, whether the battery performance deteriorates quickly remains to be seen.

The new iPad Air is one mean machine: its slick all-screen design features squared off sides and rounded corner display. It’s less than 500g in weight and the equivalent thickness of four credit cards stacked on top of each other. And not to be superficial about this cutting-edge piece of technology, but it comes in a tempting range of colours: rose gold, space grey, sky blue, green and silver.