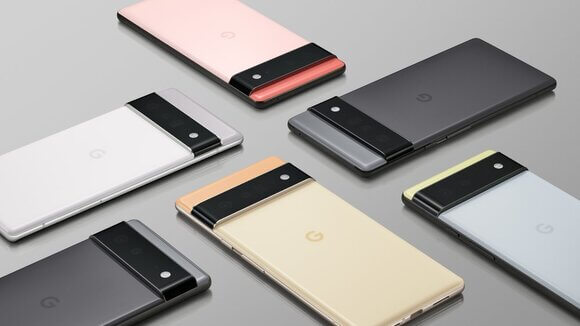 Everything You Need To Know About The Google Pixel 6

Six iterations in, and tech giant Google are only just getting going with their handset offering – but the Pixel 6 and the Pixel 6 Pro show that they’re serious about it. It’s the first Google phone that uses their own chip – the Tensor – adding to some cool functionality that’s unique to them. And the bold design also marks it out as delightfully different.

The handset, released last month, hasn’t arrived without issue – it’s still a little buggy and under-performing, but new updates suggest that these issues should be resolved soon enough, and when they do, they’ll be a serious contender against the iPhone 13 and OnePlus 9, two of the best flagship phones on the market.

This phone also sees a Pro version, whose draw is more than just its size – there are premium aspects to it too, leading to a real choice between the two phones. So what makes the Google Pixel 6 and Pixel 6 Pro worth considering? Let’s take a closer look.

Both the Pixel 6 and the 6 Pro come with a mighty 50 megapixel main lens and a 12 megapixel ultrawide lens, which will keep budding photographers happy – that’s serious quality and allows for zoomed up photos without precision loss. Social media addicts will especially love the features that come with it, like a function to keep faces blur-free, and a Magic Eraser that scrubs out people from the background of photos – so next time you visit the Taj Mahal, you could make it look like you’ve got the place to yourself.

A practical necessity is for a phone to be able to last a whole day, and that box is ticked with the Pixel 6, with its solid 4,614mAh battery size. It lasts around 25% less than the mighty iPhone 13 but that’s not to be sniffed at – it’s still an all-dayer depending on how heavily it’s used. Plus it charges speedily, at 30W – expect it to juice back up to 29% in just half an hour. Note that as is the trend these days, the charger isn’t included in the phone purchase.

You’ll easily be able to spot a Google Pixel 6 and Pixel 6 Pro on the street – the back camera lens is fashioned within a distinctive black strip, making that its hallmark feature. The colours are striking too – the Pixel 6 comes in the aptly named Kinda Coral, Sorta Seafoam and Stormy Black. The Pixel 6 Pro is clearly the more mature phone with its more muted colours – it comes in Stormy Black, Cloudy White and Sorta Sunny. Display-wise, the 6 has a 6.4-inch display and the Pro has a 6.7-inch display, making it more suited to a two-handed approach.

The headline news is that with the Pixel 6, Google have ditched Qualcomm’s Snapdragon system-on-chip and produced its own Tensor chip for both versions of the 6. It’s allowed some impressive technical advances. In addition to a slick performance generally, the chip vastly improves searches (from Google, you’d hope that would be a focus), and their voice-to-text assistant is on point. It can even manage real time translation in two languages in a video. At present a few issues with the hardware or software have been noted, like the fingerprint scanner being less than perfect, but it’s hoped these will be cleared up in future software updates.

If you’re looking to protect your new mobile, whatever the make and model, Switched On’s award winning mobile phone insurance is packed with benefits including immediate cover, 24/7 online claims, and fast repairs and replacements. Find out more here.