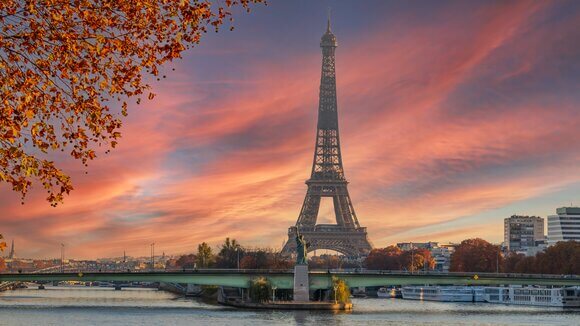 Top Destinations To Experience In Autumn

As the air becomes nippy after a long and sunny summer, autumn has officially begun. There’s something magical about the season that gives us golden leaves, pumpkins, and the most intense sunsets of the year. It’s also when many places around the world launch festivals, vineyards bring in their harvests and tankards are filled at Octoberfest. There’s a general feeling in many places around the globe of hunkering down and enjoying the good things in life while the the nights draw in.

To get that cosy, pumpkin-spiced autumn feeling more intensely than at home, try jetting abroad and discovering autumn in a new environment. It only helps that both flights and accommodation are keenly priced at this time. From rust coloured foliage to festivals of light, here are the best destinations for our favourite season.

Autumn is a great time to travel to Tuscany, especially if you like wine! The temperatures are mild at this time of year and the summer crowds have left, making it quieter and easier to get around. You’ll find the colours of the Tuscan countryside are changing and everywhere feels beautifully autumnal. This is also when the vineyards are bringing in their harvests and in some places you can get involved – there’s something unique about helping to bring in the harvest and then sampling what it will soon become. If you’re not into wine, it’s also the time for harvesting chestnuts, mushrooms, and pumpkins, found mostly in the Mugello area.

Compared to the summer months, Paris has a much slower pace to it in autumn. You’ll stand a better chance of seeing the sights and there’ll be less queues for museums and attractions. But perhaps the best reason to visit Paris in autumn is for Promenade Plantée, an old railway line in the east of the city that’s been turned into a raised park. Around autumn, it’s lined with gold and red trees that make for an extra romantic walk in the city of love. It’s also a particularly healthy time to do cultural things. The annual Autumn Festival runs from September until the end of the year, with a breadth of creative performances at over 40 venues. Plus there’s the International Contemporary Art Fair 20-23 October, showcasing 1500 artists. The hub is the glass-domed Grand Palais, but it also spreads into the Petit Palais, Musée Eugène Delacroix, Tuileries Gardens, Place Vendôme and Place de la Concorde.

If you think Amsterdam has an intriguing canal system, just check out Utrecht’s. The city’s canals date back to the 12th century and in autumn, when they’re lined with orange and amber leaved trees, they’re arguably at their most beautiful. Taking a boat trip along its canals is the most magical way to see the city, but even when you leave the water, there’s plenty to tempt you. The wharves along the side of the canal were originally built for boats to dock and unload their goods. Today these wharf cellars are boutique cafes and bars that you can dip in and out of. Plus October is game season here, so you’ll start to see delicious game dishes making their way onto menus all around the city.

Japan might be better known for its beautiful cherry blossom, and while this is stunning to see, there’s something even more mesmerising about the displays of autumn leaves around the country when the summer is over. One of the best places to see this spectacle is in Nara. About half an hour’s drive from Kyoto, Nara is an ancient city with several shrines and temples standing within the vast Nara Park. It’s here that you have the most uninterrupted view of autumn leaf displays. The park is also home to hundreds of deer who roam freely, creating some incredible photo opportunities amongst the autumn foliage. Visit Isuien Garden where the leaves on the trees take on a blazing red that’s a stunning contrast to the evergreens.

Wherever you plan on heading to in the coming months, whether that’s for winter sun or to the slopes, Switched On Travel Insurance is a must. Packed with features, such as a 24/7 emergency helpline and automatic cover for COVID-19 related issues, get a quick quote here.