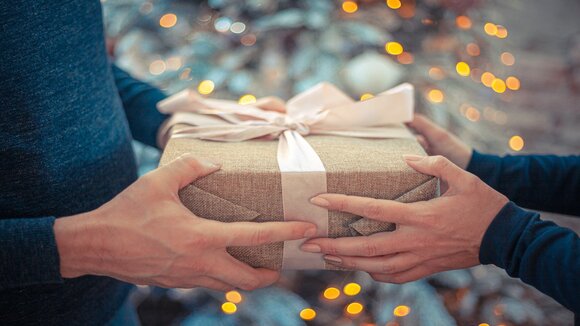 Now that Black Friday and Cyber Monday are done and dusted, we’re at the final stretch towards the finish line of Christmas, and it really doesn’t feel that long until it’s time to start the exchanging and the unwrapping – so we best get prepared!

If you’re a bit stuck on what to get your nearest and dearest this year the Switched On team has picked out its favourite gadgets in the hope it provides you with some inspiration.

For those old enough to remember the days when hand held video games were the height of technology, and for those young enough to call it kitsch, Evercade brings those times back with their retro console. One of the best on the market, it’s a faithful version of the original style, and features around four hours of battery life. They’ve a good selection of multi-game cartridges to go with – for example, there are four Atari collections, two Interplay collections, two Piko Interactive collections and a host of others. Perfect to bring a little retro fun to your favourite gamer’s life. The console costs £59.99 and the game cartridges cost £14.99. evercade.co.uk.

If your favourite person’s telly is in perfect working condition but they’re unable to stream services like Netflix and BBC iPlayer, you’ll be thrilled to know that you won’t have to buy them a whole new television so they can watch The Queen’s Gambit over Christmas. Instead, a streaming stick will bring it up to date, and the Roku Express is a reliable, value-for-money option. It’s nice and compact, and comes with an HDMI cable to use so they can get streaming right away. It’s available for the bargain price of £17.99 at the time of writing. roku.com

GoPro continues its momentum with the latest in its line, the Hero9. The newest version of the action-friendly video recorder has all the goodies you’d expect – like high-quality video capture, a user-friendly interface, great battery life and sturdiness for outdoor sports – but there’s a few significant upgrades. There’s improved motion steadiness, and you can now schedule the GoPro to record or stop recording after a certain amount of time. And because it’s so typical that you see cool stuff when the GoPro isn’t recording, you can now record and capture the 30 seconds before and after you record. Nifty eh? Note that the initial release proved a little glitchy, but we trust that subsequent updates are sorting that out. It’s on sale at GoPro for £379.99, or £329.98 if you buy a bundle including a GoPro subscription. gopro.com

Of course your choice of voice-activated speaker will depend on your recipient’s overall allegiance. For the Google-inclined, there’s plenty of draws towards the Nest Mini, a dinky lil thing that won’t need much room or attention, but can deliver a lot, from being a media speaker to a controller of your smart home. RRP is £49. store.google.com

Got a budget to blow? If your recipient isn’t already into VR, it’s the right time to get them started: nowadays it’s mature enough to be widely available, and also for the tech to be reliable. As if to prove that, the wireless Oculus Quest 2 is a vast improvement on the first version. And it’s certainly more affordable at £299. Compared to other headsets? Its processor, weight, size and controllers are among the best, making it a stand-out product. The catch is that you need a Facebook login to use it, but if your lucky recipient isn’t averse to that, it’s a top choice. oculus.com

All prices correct as of 27 November 2020. Please be aware that Switched On doesn’t receive any commission for the items contained in this article and as these gadgets have been picked independently, Switched On has no control over their availability, pricing or external websites.