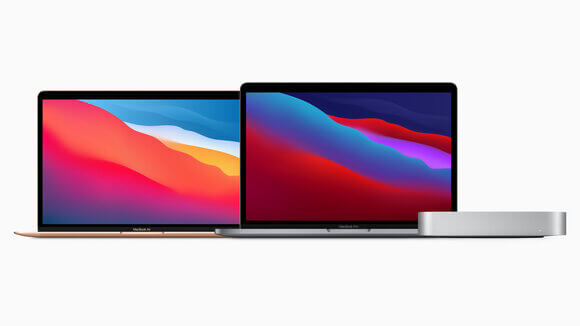 All You Need To Know About The New Apple Macs

It’s been a bountiful autumn for Apple lovers. We’ve already had the release of the iPad Air and, in a separate announcement, the iPhone 12 in all its A14-bionic-chip glory. Now, it’s the turn of computer users to see what’s in store for 2020.

While Apple only hold an eight per cent share of the personal computer market, there’s no doubt it’s the premium slice. The company have just announced their new range of computers and laptops, and in between the usual upgrades, there’s some significant changes that once again prove they’re leaders in tech. In particular, their new self-created M1 chip has already caused a kerfuffle as a game-changing technological advancement.

For those tempted to upgrade their equipment – particularly in this era of WFH and remote living – here’s the lowdown on what’s new and interesting about Apple’s 2020 range of Macs.

Whereas previously the MacBook Air, MacBook Pro and Mac mini ran on Intel processors, voila the M1 chip: the desktop version of their own A14 bionic chip that was recently announced for the iPhone 12 and iPad Air. It’s a great leap forward in using mobile-style chips in desktops, which means better battery life, compact size and better performance – already the high performance core is said to be fastest in the industry. Going forward, it’ll mean Apple will have more control over its processors’ function, and the pace at which they develop.

It’s all change on the operating system front, as Apple introduce Big Sur. The significant update in this OS is that desktops will now be able to run mobile apps for the first time. For developers, it means they need only program one version of apps that work with both Intel and M1 processors, as well as iPhone and iPad apps. Apple have already optimised their apps like Final Cut Pro and Logic Pro for Big Sur, and Adobe products like Photoshop and Lightroom are expected to follow shortly. The update is available for existing Mac users, not just those buying new equipment.

A closer look at the MacBook Air

Apple’s main laptop won’t change too much in its look, which is no hardship given it’s a pretty slick bit of equipment anyway. This year, the change is internal, and largely thanks to the M1 chip. For the Air, it means up to 3.5x faster CPU performance and 5x graphics performance compared to the previous versions – it even beats the performance of last year’s MacBook Pro. Remarkably, just like with an iPhone, no fan is needed and it can wake instantly. Better still, its battery life has vastly improved, offering 18 hours of video playback on a full charge, which is six hours more than before. The new MacBook Air starts at £999.

What’s new with the 13” MacBook Pro

The Pro still has a fan for longer performance (expect that to be eradicated in the coming generations, as the technology develops) but apart from that, it has all the other benefits of the M1 chip. For example, you’ll get 20 hours of video playback, which is twice as long as the previous version. The 15” Pro hasn’t been updated yet, presumably as Apple wait for the chip to advance enough to make a notable improvement to its heavy-duty laptop. In the meantime, the 13” version starts at £1,299.

Last but not least, introducing the new Mac Mini

The Mac Mini was last updated in March 2020 so it’s unusual to see a new iteration so soon, but the M1 chip makes it worth another update. Similar to the others, it boasts up to 3x faster CPU performance than the previous Mac Mini and up to 6x its graphic performance, although it still has a fan, like the MacBook Pro. Unusually for Apple, who aren’t afraid of bestowing themselves a healthy profit margin, this Mac Mini starts from £699, which is £100 cheaper than the previous version.