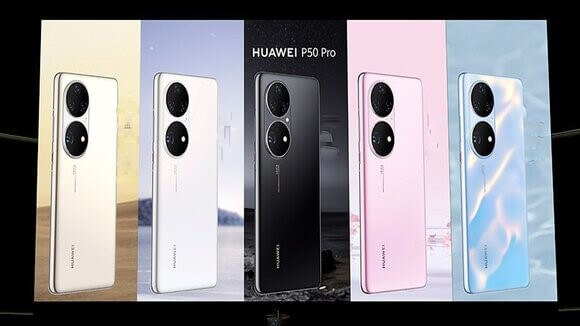 Everything You Need To Know About The Huawei P50

As the third biggest phone maker in the UK after Apple and Samsung, it’s no surprise that plenty of early adopters are keen to hear what Huawei’s new flagship phone looks like. The P50 and P50 Pro were announced at a recent launch event in China that streamed out across the globe. And while there were some surprises – like the phone won’t have 5G capability because of US sanctions against it – it’s largely everything we’d hope from the 2021 version of their flagship line, including a very reasonable price point.

The event launched two phones: the P50 and the premium P50 Pro (but no Lite or Pro+ version, as with the P40s released last year). What do these phones entail and what’s the difference between them? Let’s take a closer look…

As we might expect from the phone giant, there’s a solid offering in Huawei’s camera. Budding social media stars will be happy with the P50’s three rear lenses: a 50MP main lens, a 12MP ultra-wide lens and a 12MP periscope lens that supports 5x optical zoom – all decent offerings for a flagship. The Pro version packs in four lenses: a similar 50MP main lens, a 13MP ultra-wide lens, a 64MP telephoto lens and a 40MP monochrome lens for crisp and clear black and white photos. The front (aka selfie) camera for both phones is a 13MP lens, which is in line with other cameras of that ilk.

If you’re a heavy phone user who’s always running out of juice, both versions have fast 66W wired supercharging. The battery is reasonable enough for flagship phones: the P50 has 4100mAh (compared with 4000mAh on the latest Samsung S series), while the Pro version has 4360mAh (compared with 5000mAh on Samsung’s latest Ultra version). So you’ll get plenty of battery life from them both, although the Pro doesn’t add too much extra value. However it does have the added feature of fast wireless charging, which is especially handy in households with different phone connections!

Huawei might not be the best looking phones on the market in our opinion, largely because the rear camera lenses are encased in two punched-out black holes which dominate the design. But they still hold their own with other mid-market offerings. They’ll come in three different colour options: Gold Black, Cocoa Tea Gold and Snowy White. The P50 has a flat-edge OLED screen, and 6.5 inches diagonally and the P50 is 6.6 inches with screen curves at the edges.

The main issue to be aware of with the P50 series is that they’re not 5G compatible, because of US sanctions against the Chinese firm. If 4G’s all you need, on to the other stuff. The operating system is Huawei’s own HarmonyOS2, which is similar to Android, but designed to sync nicely with other Huawei devices. The processor is the Snapdragon 888, the best available for the phone. The phones are fairly lightweight at 181g and 195g for the Pro version, and as is the trend, they have a USB-C port but no headphone jack. The P50 offers FHD+ display (2400x1080p resolution) with 90Hz refresh rate, while the resolution is the same on the P50 Plus, but with a 120Hz refresh rate, which is perfect for on-the-go gamers.

An international release date is yet to be confirmed, but the P50 Pro will go on sale in China on August 12 and the P50 will follow in September. If the Pro’s spec doesn’t seem that better than the standard version, that’s at least reflected by the fact that they’re in the same price band: the figures announced for China equate to the P50 starting at £500 and the P50 Pro costing £550 for 128GB of storage. However the Pro does go all the way up to £890 for 512GB of storage. Tempted?

If you’re looking for mobile phone insurance Switched On policies are packed with features such as 24/7 online claims, immediate cover and cancel anytime policies. Prices start from just £4.25 per month or take out annual cover and you’ll get 2 months free! Click here to find out more.