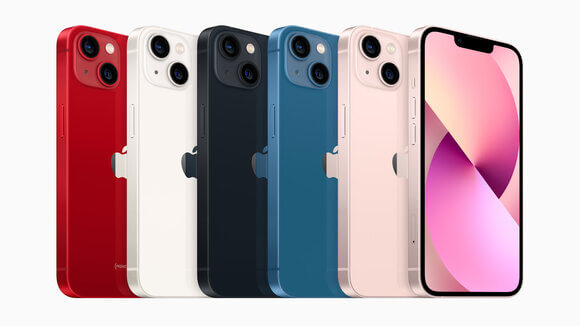 Everything You Need To Know About The iPhone 13

Apple fans were in for a tasty treat at the company’s September event as the company introduced the iPhone 13, iPhone 13 mini, iPhone 13 Pro and the iPhone 13 Pro Max that betters last year’s model – which was already market-leading in many ways. Aided by slick videos and graphics (what else would we expect), the global audience was told of the latest boons for the 2021 version, including a better battery life and the use of Apple’s A15 Bionic processing chip that makes the phones run quickly and smoothly, even with multiple apps on the go.

While it’s not the biggest overhaul of iPhones we’ve ever seen, the changes and tweaks – and an excellent price – make it a tempting option for those in need of an upgrade…and those looking for an excuse to upgrade. Read on for the iPhone 13’s key highlights.

There’s an overhaul of the three-lens camera system, with the wide camera including a better sensor for less shaky-cam moments and slicker low-light photography (it soaks in 47% more light compared to the iPhone 12). The phones also allow for 6x optical zoom without losing quality of the image so you can take shots from a distance, but the macro capabilities have improved too, to be able to take clearer snaps up close. All three cameras have night mode, a nifty Cinema Mode that means content creators can flip between shooting from the front to the rear video – perfect for uploading reaction shots to TikTok.

Already impressive in its long-lasting battery, things just got better with the iPhone 13. All models have larger batteries, and the inclusion of the new A15 Bionic processor, plus general efficiency improvements, mean that this model can last much longer. Apple suggest that the iPhone 13 and iPhone 13 Pro Max both last two and a half hours longer than their iPhone 12 versions, and the iPhone 13 mini and 13 Pro last an hour and a half longer.

With the 13, Apple have taken the approach of ‘don’t fix what’s not broken’. While the range largely remains the same size and design as their iPhone 12 counterparts, the notch on the front is 20% smaller, there’s a new diagonal rear dual camera layout, and you’ll notice the colour options have been tweaked. The iPhone 13 and the mini come in Pink, Blue, Midnight, Starlight and Product Red. The Pro and Pro Max come in arguably more modern shades: Graphite, Gold, Silver, or the new Sierra Blue.

Much of the iPhone 13 range’s upgrades take place under the hood. The main improvement is the inclusion of the A15 Bionic processor, which makes Apple products even slicker and quicker to use. Combined with other hardware upgrades, Apple say the CPU is 50% faster than its competition. While the iPhone 13 and the Mini refresh at 60Hz, the Pro and Pro Max versions have been upgraded on this front, with 120Hz screens making for smooth and detailed imagery. The screens on all can go around 25% brighter, making it easier to see your phone in the bright outdoors.

It’s a mark of the increasing competition in the phone market that Apple have stabilised their price – in fact the iPhone 13 models are £20 cheaper than the iPhone 12 when it first launched. You’ll be able to get your hands on the iPhone 13 mini for £679, the iPhone 13 for £779, the Pro for £949 and the Pro Max for £1,049. They can all be pre-ordered from September 17, and will be launched on September 24.

If you’re looking to protect your iPhone Switched On Insurance offers policies packed with features that start from only £4.25/month, that’s just 12p/day! And if you take out annual cover you’ll get two months free. Find out more here.