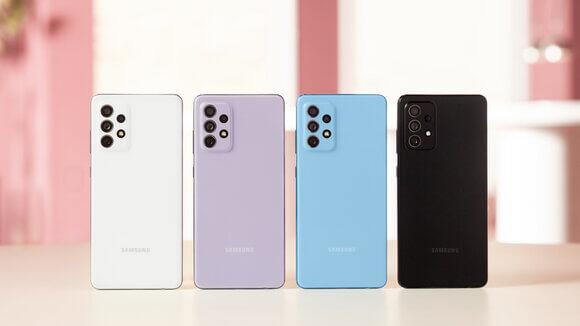 Just weeks after releasing their latest flagship phones, the S21 and the S21 Ultra, Samsung have made another bold grab at the ever-competitive smart phone market with their bang-for-your-buck A52 5G and A72. A third model, the A52, was also revealed at Samsung’s launch event, but won’t be available in the UK as we have its 5G counterpart – even better.

According to the marketeers, the A range stands for ‘Awesome’, but we’d also consider it for ‘Affordable’ and ‘Accessible’ too. For while the top-tier phones from premium brands regularly run into four figures, these aim squarely at younger folk whose wallets are light but phone use heavy.

Rather than fixate on bringing never-seen-before technology into the public realm, the A range concentrates on repurposing key features for those who see uploading social posts as part of daily life. So there’s a super smart camera, hi-spec screen, and oodles of battery life that goes on for days. Yes, you read right.

To find out just why the mid-range market just got more interesting, here’s our lowdown on the Samsung A52 5G and A72.

Let’s start with the topline. Samsung themselves have said that the camera is “designed to keep up with the demands of content creators”, and that runs through its photography features. On both phones, the cameras are fitted with snazzy image stabilisation, so that shaky video cam is a thing of the past and low light shots are enhanced.

There’s also a 12MP ultra-wide shooter for those panos we’ve all been taking while out walking. Better still, the A72 has an 8MP telephoto camera with an optical zoom that, surprisingly, improves on the S21’s and the S21 Ultra’s. Along with this hardware comes some intelligent software: Snapchat is incorporated in, and it can automatically optimise 30 scenes to take the hard work out of shooting popular subjects like hills, sunsets, food and people.

All that automation, yet it doesn’t scrimp on manual settings for advanced photographers. It features Pro Video mode plus a Pro Mode for photos. Not half bad for a mid-range phone, eh?

The A52 5G features a 4,500mAh battery, and the A72 a 5,000mAh battery. Which is to say they last two days per charge, according to Samsung. We take that with a pinch of salt, especially as it depends on usage, and both 5G and large screens take a whole lot of battery. But that’s still an appreciated leap forward, and will be super useful when festival season returns.

Both phones come in Awesome Blue, Awesome White, Awesome Violet or Awesome Black. The modern-feel palette is aligned with the pastel colours of the S21. The A72 is the larger of the phones, with a 6.7in display, though the A52 isn’t far behind with its 6.5in display. All in all, it looks the part.

You’ll be impressed with the quality of the full HD+ display too. The A72 features a 90Hz refresh rate and the A52 5G features a 120Hz rate to make use of its ultra-fast connection speed. Combined with its Real Smooth technology, it makes for an easy, clear display for photos and videos, as well as for video games and streaming sites. They both have 128GB of storage and 6GB of RAM, with microSD support up to 1TB of extra storage. It’s also water resistant, has in-display fingerprint recognition, and Dolby stereo sound for those times you’re caught short without headphones.

If you’re looking to insure your Samsung phone get a quote from Switched On today. With our great value policies you can enjoy immediate, cancel anytime cover with 24/7 online claims and fast replacements and repairs, including at Samsung Stores (upon claim approval).